The optic nerve is the pathway that carries the nerve impulses from each eye to the various structures in the brain that analyze these visual signals. 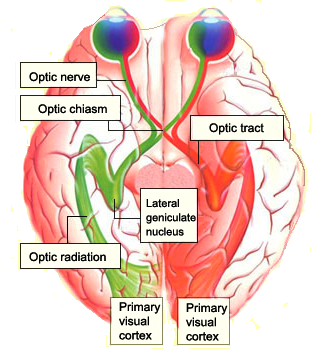 Optic chiasm
The optic nerves of the two eyes emerge from their optics discs and intersect at the optic chiasm just in front of the pituitary gland. In the optic chiasm, some of the axons from the two retinas switch sides to allow crossed processing of the visual signals.

The axons from the nasal side of each retina cross sides in the optic chiasm so that the  left half of the field of vision is perceived by the right cerebral hemisphere, and vice versa. But because the visual information that reaches the temporal side of each retina comes from the opposite side of the visual field to begin with, the axons from this side of the retina do not need to cross sides. Instead they proceed straight ahead through the optic tract.

LGN
The vast majority of the nerve fibers in the optic tract project to the lateral geniculate nucleus (LGN) in the dorsal part of the thalamus. The LGN is the main relay in the pathway to the primary visual cortex.

20% of the input to the LGN comes from the eye (bottom-up), while 80% comes from other cerebral areas (top-down).

The projection from the LGN to the visual cortex is called the optic radiation. Because damage at any point along the pathway from the retina to the cortex results in some degree of blindness, this is clearly the pathway through which conscious visual perception takes place.

The optic nerve, which carries the image captured by each eye to the brain, terminates on the cells of the lateral geniculate nucleus (LGN), the first relay in the brain’s visual pathways.

Information arrives from the retina and is assembled by the brain in stages. The primary visual cortex separates the image into distinct feature channels. Different groups of cells work collectively to extract each feature. 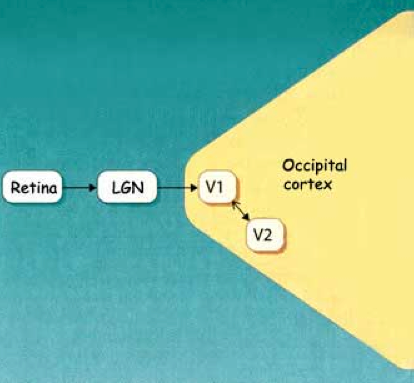 The primary visual cortex (also known as the striate cortex  or simply V1) is located in the most posterior portion of the brain’s occipital lobe.

The primary area (V1) and the secondary area (V2) are surrounded by many other tertiary and associative visual areas: V3, V4, V5 (or MT), PO, etc. Researchers have so far discovered nearly 30 different cortical areas that contribute to visual perception. Each processes a unique aspect of visual information. These areas are like a multi-screen cinema, but here each screen is showing a different attribute of the same movie– some just motion, others the colors, etc. 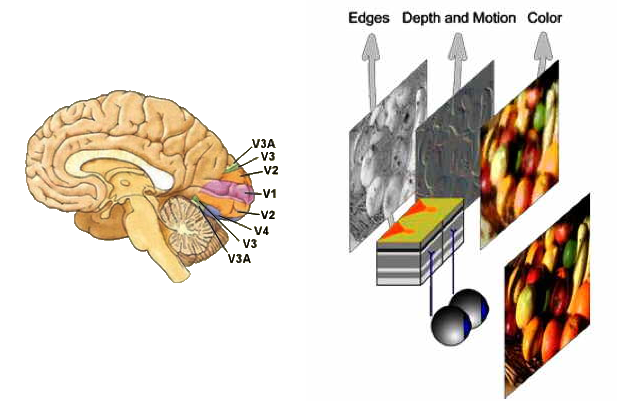