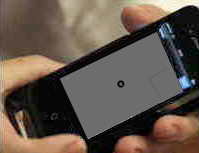 The MeyeSight Visual Fitness Test tests important aspects of eye sight and allows you to monitor  changes to your vision over time.

“I must have glaucoma!”

This app does NOT diagnose or attempt to suggest treatments for disease.

“This test result worries me. It’s something I should get checked out”

Any abnormal test results or changes in results over time should be interpreted by a qualified health professional. Abnormal test results do not point to any one disease; results can have multiple explanations. But they do raise a red flag that you should pay attention to.

While most of the existing vision testing apps test only some variant of visual acuity, the MeyeSight Visual Fitness Test is unique in its ability to probe the three most important aspects of vision:

Detail vision (usually referred to as visual acuity) describes the acuteness or “sharpness” of vision – the ability to perceive small details.

This is the aspect of vision tested with the familiar letter chart test and many vision testing mobile apps. The result of this test is known as “visual acuity”; it indicates the smallest detail that can be recognized.

Because a reduction in visual acuity can be an indication of a wide variety of eye problems, the test remains a very useful tool, still In use after a century and a half.

Because of this broad sensitivity, detail vision is not a diagnostic test; visual acuity alone cannot determine the cause of the vision loss. Detail vision loss is only a red flag which should encourage you to see a doctor.

Because visual acuity is so easily measured, it is often used as a primary eligibility criterion for things like a driver’s license, a pilot’s license, and for certain disability benefits. However, the ability to perform various tasks depends on many more factors than visual acuity alone.

For those disorders that affect detail vision, an acuity test is a good follow-up tool to document whether a condition is worsening or improving or to record the effect of various interventions.

Detail vision measures the ability to recognize small objects with high contrast. Often however, the visibility of objects in our environment is limited more by lack of contrast than by their small size.   Contrast sensitivity is the ability to detect and recognize differences between an object and its background. Difficulty seeing the edge of steps when going downward is an example of diminished contrast sensitivity, as are a pedestrian who misses a curb or step or a driver who does not see a pedestrian on a dark road. In many surveys, contrast sensitivity is the visual parameter that is most closely related to problems experienced in activities of daily living.

Like visual acuity, contrast sensitivity loss is not disease-specific. It can indicate optical problems (such as refractive errors or opacities), disorders of the outer retina (such as macular degeneration), or neural problems that might occur in the inner retina (such as glaucoma), the optic nerve (optic neuritis), or in the brain and visual cortex.

The consequences of contrast sensitivity loss are significant, since many activities of daily living involve objects of less than optimal contrast. Those with contrast problems often notice that something is wrong, but they cannot pinpoint it. They become frustrated patients when told not to worry because their high-contrast visual acuity is normal.

Test results that indicate significant contrast sensitivity loss might suggest being proactively cautious, avoiding night driving and other low-contrast situations that might result in a fall. Providing better contrast and better illumination in the home can also improve many tasks.

Contrast problems and visual acuity problems can coexist, but one does not cause the other

Disturbances in the visual field may cause mobility problems; you may stumble over objects or steps, bump into objects to the side, or be surprised by people or objects that suddenly appear in your side vision. These problems are often not recognized as visual field loss but rather passed off as being “clumsy.”

The MeyeSight surround vision test allows you to become aware of your scotomas, which in turn allows you to develop strategies for adapting to these areas of diminished vision.

If you know you have an eye disorder, and if you are being monitored by an ophthalmologist, you can use the MeyeSight Visual Fitness test to monitor your eye sight between doctor’s visits. You can compare test results over time, and you can show them to your doctor at your next visit.

Warning
While the MeyeSight Visual Fitness Test can detect many eye sight abnormalities, it will not detect all disorders. If your results are out of the normal range or if they are getting progressively worse, you should see an eye doctor.

This app is meant to raise a red flag when abnormal results are found. Since any finding can have multiple explanations, all abnormal test results should be interpreted by a competent health professional.

This app is not sufficient by itself to diagnose or treat anydisease condition.

The MeyeSight Vision Fitness Test can be used on Android phones, iOS phones or tablets (iPhone or iPad).

Because the screen size and resolution of mobile devices varies widely,  each device you want to run the test on must first be calibrated. You only need to do this once for each device.

If your device has not yet been calibrated. you are asked to do so before beginning the first test. It’s best to use a ruler or tape measure if you can. 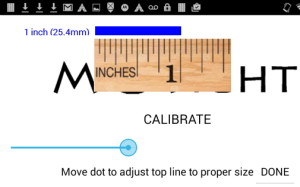 Holding the screen at the right distance is important, as is consistency from test to test. It’s best to use a ruler or tape measure the first time you take a test so as to experience how far 16” is. (It’s hard to just guess 16”)

Try to avoid strong sunlight shining on the screen that will wash out the display. Also, position yourself so that there are no distracting reflections on the display.

Selecting whether to test eyes separately or together 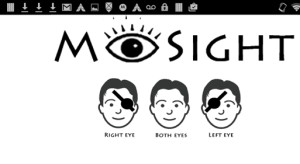 General instructions for taking the test

For each test your task is to observe the pointer (arrow) on the screen and then swipe in the box at the bottom right of the screen in the direction of the pointer. 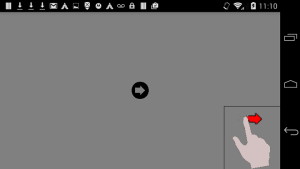 The next pointer will appear on the screen. 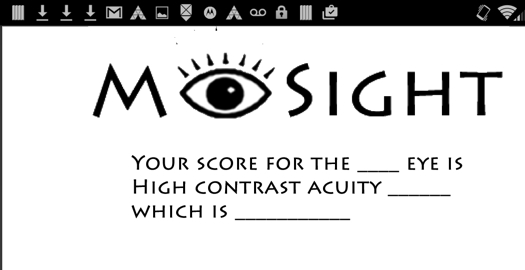 After each test is completed, you are asked whether you want to save the test results. Each test is saved as images that you can compare with earlier results. You can share the test result images with others, including your doctor. To protect your privacy, they are stored separate from your picture gallery, so that they will not be included in automatic uploads to social media or to other sites. To share them with your doctor or with others. you must explicitly request the transfer.

As the pointer gets smaller, it is natural to want to bring the screen closer. Resist this temptation. For accurate results, your viewing distance must remain at 40 cm (16″) for all three tests.

You will not do as well as with the high contrast acuity test. It is the difference between your high contrast and low contrast performance that indicates your contrast sensitivity. 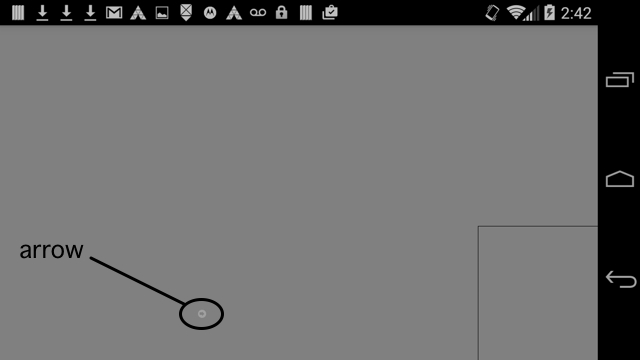 The larger the screen on your device, the larger the retinal area that can be tested. You can test for field defects close to fixation (as in MacularDegeneration) on a small screen (such as the original iPhone), while  testing for defects that are farther from fixation (as in glaucoma) requires the larger screen of a full sized tablet (10” or more).

At the conclusion of each test your score is displayed

The Interpret button provides a brief explanation. is this explanation or result?

You can save the test results or abandon them.

More than one person’s results can be saved on a device.

At the end of the three tests you have another opportunity to ask for interpretation. ???see results?

The visual acuity sequence determines the smallest detail that can be recognized when presented with high contrast.

In a medical context, visual acuity that is less than normal can have many causes. Frequent causes are:

You can not diagnose any of these conditions from the findings of a visual acuity test. Noticing a deficit or a change in acuity indicates you should seek a professional assessment for diagnosis and for possible treatment.

Visual acuity test results can indicate potential problems with detail vision that would suggest exploring the potential of visual aids and magnification.  As well, visual acuity deficits can be compensated for by learning simple tricks to improve the performance of activities of daily living. Helping yourself

As with visual acuity, a contrast sensitivity deficit can have many causes.  It may point to:

Again, contrast sensitivity loss by itself cannot diagnose any specific condition. It can, however, be an indicator of the need for a more comprehensive professional examination.

Contrast tests are usually not a routine component of professional eye examinations, leaving many people aware that they have a problem, but unable to pinpoint what that problem is.

Visual field test results that indicate areas of diminished or lost vision (scotomas) act as a screening tool; they may indicate one of several diseases and require professional assessment.

People with glaucoma are often unaware of their condition and pass off their difficulties with mobility as “clumsiness.” Therefore indications of areas of vision loss in the peripheral area should definitely be checked out by a proferssional

If you are in treatment for a disease such as glaucoma, your doctor may be  measuring visual fields to judge the effectiveness of their therapy, but they may very wee not be discuss the results of those tests or the implications of the field loss.

When some areas of the retina are damaged, you may experience vision problems related to central or peripheral vision loss. At a certain point in peripheral loss it may seem as though you are seeing the world through a long cardboard cylinder.  Even if you do not, you may be experiencing areas of lost vision (scotomas LINK>>) in situations such as: