The process of “vision” starts when light rays enter the eye and ends with visually-guided behavior.  This process goes through three main stages:

Each of these stages presents unique problems for vision.

Because the different stages of visual processing have very different properties and can present with very different kinds of problems, it is important to keep this in mind when testing and analyzing visual performance. Understanding where in the visual process problems are arising allows you to identify appropriate solutions.

NOTE: The stages of visual processing are explained in detail the MeyeSight module Our visual system

This module focuses on the problems associated with the three stages of visual processing, as well as pointing you to potential solutions 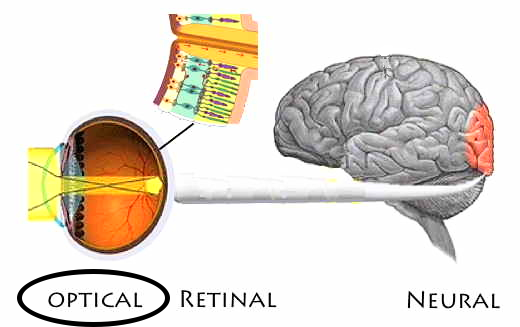 The optical stage of vision is associated with the optical apparatus of the eye–the front of the eye. This first part of the visual pathway should result in a clear image of the environment on the retina.

Adjusting the amount of light: the iris

The pupil is the opening that lets light enter the eye and ultimately reach the retina. The diameter of the pupil is controlled by the iris, an adjustable aperture whose contraction lets the eye adapt continuously to changing light conditions.

When the lighting is bright, the iris constricts and the aperture (the pupil) though which the light enters the eye becomes smaller. This prevents the light sensitive receptors (rods and cones) in the retina from becoming saturated with too much light.

Focusing the light: the cornea and lens

The cornea provides about three fourths of the eye’s focusing power. The light waves passing through the eye are further focused by the two curved surfaces of the lens, which changes shape to sharpen the image’s focus.The lens is suspended between the aqueous humour and the vitreous humour, the fluid that fills the inside of the eye. The aqueous humour and the vitreous humour play an essential role in focusing the image on the retina. Because light travels at different speeds in these two fluids compared with its speed in the air, they bend any light rays that enter the eye at a non-perpendicular angle, so that these rays strike the proper place on the retina. This process is called refraction.

Light is focused by the curvature of two lenses: the fixed cornea and the flexible lens. The curvature of the cornea also accentuates the refraction of the virtually parallel light rays that reach the eye from very distant objects. Some of these rays strike the cornea’s center. Hence they are already perpendicular to the cornea, and their angle does not change. They continue straight ahead to the centre of the retina. But other rays from these same distant objects strike the curved parts of the cornea. These rays are bent inward so that (provided the person has no vision defects) they arrive at exactly the same central point on the retina and form a focused image.

Where distant objects are concerned, the cornea does most of the refracting of light rays to make them converge at a single point on the retina; the lens also contributes, but to a lesser extent. For closer objects, however (starting about 25 feet from the eye), the lens plays a far more active role in focusing the image on the retina. The light rays reaching the eye from closer objects diverge more, so they must be refracted more in order to converge on the retina. The lens alters its own shape to provide this additional refraction.

As one gets older, the lens loses its elasticity and remains too flat even when the ciliary muscles are completely contracted. When this happens, images of near objects, such as a book you are reading, are blurred.

Potential problems in the optical stage and their solutions: refraction and opacities

When light rays do not converge on the retina precisely, several types  of vision defects may occur.

The ability of the eye to focus properly depends on a few aspects of the eye:

A cataract is a clouding of the eye’s lens that occurs when some of the protein that keeps the lens clear and lets light pass through it clumps together and starts to cloud a small area of the lens. Although cataracts are related to aging – more than half of all Americans 80 and over either have or have had a cataract – they can also result from smoking and diabetes.

The drainage system
Much of the mechanical part of seeing takes place with structures in the front part of the eye, called the anterior chamber. You can think of the cornea as the crystal of a watch and the iris as the face of the watch. The space between them is filled with a watery fluid called aqueous humor. This fluid bathes and nourishes the cornea and lens, which have no blood supply of their own.

The aqueous fluid is pumped into the eye from the ciliary body just behind the iris where it is produced. The fluid circulates around the lens, through the anterior chamber and drains out through the trabecular meshwork, the tiny sponge-like filtering system located where the cornea and iris meet. 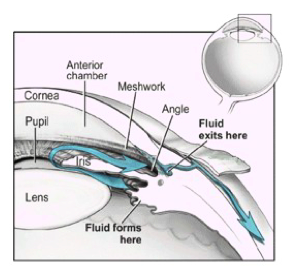 After passing through the trabecular meshwork, the aqueous humor passes through the Schlemm’s canal, a minute duct that runs in a circle just beneath the border of your iris  and the white of your eye (the sclera)., and is absorbed into the bloodstream. The health of the eye depends on a continuous process of production, flow, and drainage of this aqueous fluid.

Potential problems in the optical stage and their solutions: drainage

The aqueous fluid inside the eye plays another important role, one critical to glaucoma: the fluid provides the necessary pressure inside the eye, known as intraocular pressure (IOP), to maintain the shape of the eye. If too much fluid is produced or the drainage system does not adequately remove the used fluid, pressure builds up in the eye and the eye expands, much like a balloon. When the eye expands with the increasing pressure, it gives way at its most vulnerable point, which is where the optic nerve exits the eye. The optic nerve is thin and vulnerable where it leaves the retina, and so the result of the increased intraocular pressure can be damage and then death to the axons of the nerve cells.