The acuity— the sharpness — of vision denotes the ability to recognize small details.

The center of gaze — where we are looking — is through the fovea, which provides the greatest possible visual acuity. Measuring visual acuity, which is often equated with vision, assesses the function of a small area of the retina – less than 1 degree in diameter.

Outside the center of gaze, we actually have quite low detail vision, yet we remain unaware of this because we instinctively direct our center of gaze to where we are looking, moving our eyes, head and our body as necessary.

The visual acuity sequence of the MeyeSight Visual Fitness test determines the smallest detail that can be recognized when presented in high contrast. When you identify the direction of the symbol correctly, the next symbol shown is one step smaller; if the response is incorrect, the next symbol is one step larger, with each step corresponding to one line on a letter chart.

Detail vision that is less than normal can have many causes. You can not diagnose causes from the findings of a visual acuity test, but noticing a deficit or a change in acuity indicates you should seek a professional assessment for diagnosis and for possible treatment.

In terms of day-to-day living, visual acuity test results can indicate potential problems with detail vision that would suggest exploring the potential of visual aids and magnification as well as learning simple tricks to improve the performance of activities of daily living.

Most likely you have taken the Snellen chart acuity test many times over your lifetime.Over 150 years ago Snellen introduced his method of quantifying the resolution of the eye by using a letter chart with progressively smaller letters to measure not only how well someone can distinguish details of objects but also their sharpness of vision at a specific distance.

The Snellen chart defines its numerical value as a ratio comparing the patient’s performance to the standard observer. For people who need letters that are 2x closer or 2x larger than this standard, their visual acuity is 1/2.

Snellen described 20/20 as a size that could be easily recognized.  “20/20” vision means you see at 20 feet what the normal or standard person sees, If however the last line you can read is the 40 line, this indicates that the line you correctly read at 20 feet away can be read by a standard observer from 40 feet away and your visual acuity is 1/2 (20/40 in the US, 6/12 in Britain and 0.5 in Europe).

This Snellen fraction is now the standard for measuring visual acuity.

Visual acuity in 5 minutes: an introduction to acuity

“Visual acuity refers to the sharpness of one’s vision;  it is a measure of how well a person sees.”

The above quote, from a popular medical website, shows a common way that vision is presented. The emphasis on letter chart acuity has been so strong that we often refer to visual acuity as “vision.” It is more accurate to say that “My visual acuity is 20/40”.

Visual acuity has maintained its status as the benchmark and standard by which to measure eyesight. It is still how we determine eligibility for benefits (“legal blindness”) in the United States.

Unfortunately equating acuity with vision – for example being told your “vision” is “good” because your acuity is good – can lead one to believe that there are no vision problems when there are.

And you may be confused when you are experiencing difficulties with your vision even though your acuity is “normal.” Because your vision problems may be caused by other factors such as reduced contrast sensitivity, color sensitivity and dark adaptation. 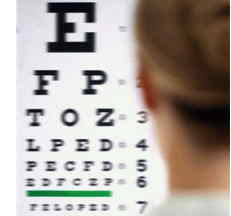 If you find that although you can identify the Snellen chart letters they aren’t sharp or clear, you will want to move on to other tests that can explain why the letters are not sharp.

As well, be aware that while doctors testing for visual function of your eye may push you to find their threshold acuity level, when testing for functional vision you want to find the magnification needed for comfortable reading.

How the EYES functionHow YOU function

Although acuity is but one of many parameters of vision, it is a very useful indicator of a wide variety of eye problems; there are few eye conditions in which visual acuity is not affected (glaucoma being one).

Visual acuity is well suited to detect problems in the optics of the eye. Optical problems that affect the eye’s ability to deliver a clear image of the outside world to the retina include:

Visual acuity in the real world

Visual acuity loss can have wide-ranging effects on one’s activities of daily living. We rely on visual acuity for reading, recognizing faces an gestures, and for navigating the world.

The results of a visual acuity test provide concrete information for adopting ways to compensate for acuity loss. If, for example, your visual acuity is 20/40 (1/2), you need letters that are twice as close or twice as large to see as when your acuity was 20/20. The most common form of adaptation to changes in visual acuity is corrective lenses, usually eyeglasses or contact lenses.

When corrective lenses are not adequate to bring your visual acuity to close to normal, there are a wide variety of visual aids and magnification devices that can be utilized.

Reading the letters on a letter chart at a reasonable visual acuity does not necessarily mean one’s vision is adequate for the tasks of everyday living.

If you are told your vision is good but you don’t think you are see well, be aware that:

If your visual acuity test results are “good” or”normal” but you find you are having difficulty with activities of daily living such as reading, driving at night, or climbing stairs, other aspects of vision such as contrast sensitivity and visual fields should be evaluated.

A reading card with continuous  text can be more informative than testing letter acuity. Letter recognition requires only a very limited retinal area while word recognition requires a larger area and fluent reading requires the availability of additional areas to the right of fixation to guide successive saccades.

Charts like the SK Read chart for identifying scotoma interference with reading. By removing contextual clues, it allows words to be easily confused and facilitate the verbalization of mistakes encountered while reading. The pattern of verbalized mistakes can help to differentiate left and right sided scotoma interference.

For your doctor, a measurement like acuity may represent the outcome of medical and surgical treatments. In terms of functional vision, however, a measure like acuity is a starting point for determining strategies for optimizing vision.