While doctors often focus on visual acuity as a measure of vision, there’s more to vision than just that acuity number.  In addition to acuity, activities of daily living such as reading, cooking, using a computer, walking the streets and recognizing faces rely on visual components such as contrast sensitivity, visual field, color perception, stereoscopic acuity, dark adaptation, fixation and more.

Reduced contrast sensitivity can significantly affect vision quality, including affecting one’s acuity! Someone with low contrast sensitivity may have difficulty navigating his or her environment, even if they have good acuity. Disruptions to the visual field can affect one’s vision even with “good” acuity. In order to understand your current vision, it is invaluable to understand the many factors that affect how you are seeing.

For more than 100 years the measurement and description of a person’s vision has been tied to the results of the Snellen acuity test.  But the letter chart test measures only visual acuity and measures it under almost ideal contrast conditions (deep black letters on an empty white background), an environment that does not represent the world we actively inhabit.

Three of the most important aspects of vision are:

The sharpness of vision – often referred to as visual acuity –  denotes the ability to recognize small details.

The center of gaze — where we are looking — is through the fovea, which provides the greatest possible visual acuity.  Measuring visual acuity, which is often equated with vision, assesses the function of a small area of the retina – less than 1 degree in diameter.

Outside the center of gaze, we actually have quite low visual acuity, yet we remain unaware of this because we instinctively direct our center of gaze to where we are looking, moving our eyes, head and our body as necessary.

The Snellen letter chart tests only one of these visual channels.; it measures one’s ability to see well-defined black letters on a white background, which is a very high contrast environment. While most objects we see are larger than the letters on a letter chart, they are much lower in contrast.

Many people with normal or near-normal high-contrast acuity have low contrast sensitivity. Low contrast is common among the elderly, as it is a common characteristic of the aging eye.

Even in normal lighting situations reduced contrast sensitivity affects how and what you see. 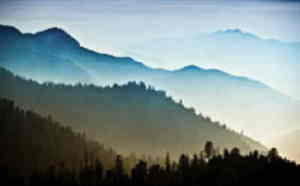 If you have normal visual acuity but poor contrast sensitivity you might see the high contrast tree line in the foreground of the picture above yet have difficulty seeing the shapes of the mountains against the sky in the background (low contrast).

Loss of contrast sensitivity – either from aging or eye conditions – can ____ly affect performance of activities of daily living such as walking down poorly lit stairs.

While central (foveal) vision allows you to see the fine details of objects you are looking at directly, peripheral vision is used to find objects and detect threats and is important for general orientation and balance. When you move through your environment and around obstacles, go up or down stairs, reach for something, ride a bicycle, or do any physical activity, you’re using peripheral vision.

When your vision becomes diminished on one side, you may find yourself bumping into door frames or furniture, and driving can be dangerous when you cannot see traffic in the next lane or cars entering from side streets.

Peripheral vision is also important for tasks such as reading. If, for example, you have reduced vision on the right side if may be difficult for you to read a line of text, as your ability to quickly see the next word will be diminished. You might not be able to even read long words. With poor vision on the left side you might have difficulty finding the beginning of the next line.

Most of our peripheral vision is subconscious. Driving, walking down the street, eating a meal, reaching for something all use visual information in our visual field that is processed sub-consciously, never reaching consciousness.
Because much of this process is subconscious we are not spontaneously aware of vision loss in our visual field, and this as well makes testing more difficult.